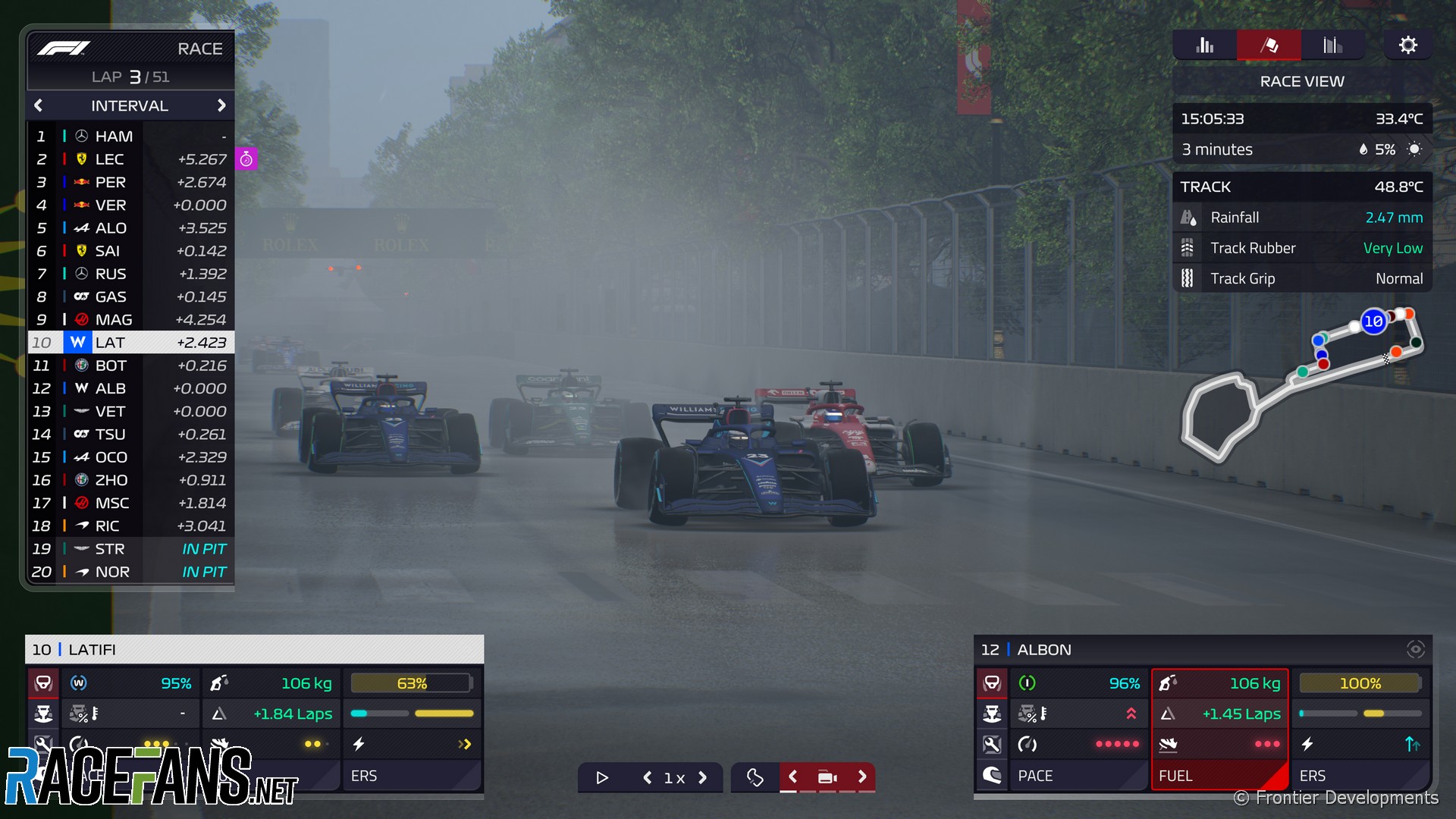 Later this month, Frontier Developments will release the first officially-licensed Formula 1 management game for over two decades with F1 Manager 2022.

The first in an annual franchise of games due to reappear in 2023 and 2024, F1 Manager will provide players with a unique opportunity to play out their own virtual F1 fantasies from the position of a team principal, instead of as a driver.

With that, developers at Frontier have been in an unusual position of making a Formula 1 game where they have not had to worry about physics, handling or necessarily on making the most realistic and detailed car models. Instead, the game’s presentation has been a major focus from the very beginning, to ensure the complex, mathematical simulation engine underpinning F1 Manager’s gameplay can be enjoyed in the most immersive and authentic way possible.

While graphics are naturally the most important part of a game’s presentation, audio has been a crucial point of emphasis for F1 Manager’s developers. RaceFans spoke with Frontier’s principal audio designer, Tim Bartlett, leading up to the release of the game to find out more about how F1 Manager’s sound design is so important to creating the feeling that the player themselves is on the pit wall.

The first thing to notice about the sound effects in F1 Manager is that rather than synthetically recreating engine sounds within the game like every popular racing game you could think of, Frontier took advantage of unprecedented access to Formula 1’s own broadcast archive to use actual sounds recorded from onboard footage, TV cameras and actual team radio clips between drivers and engineers.

“All our in-game team radio is taken from previous race weekends,” Bartlett explains. “We wanted this to be an authentic experience for F1 fans, and so part of that is making sure our system is as close to reality as possible.

“When we first began scoping out our plans for the F1 Manager series, we knew we wanted to create an audio experience which mirrored TV broadcast as closely as possible,” he continues. “The majority of people identify the sounds of F1 as what they hear when they’re watching on TV, so that was really our starting point.

“Using real audio gave us a much wider range of content to capture from and ensures that each car sounds as they do on the broadcast coverage. Our engines, for example, are created using audio samples from each car throughout practice sessions, so we get a real mix of driving behaviours to then replicate in-game, from low down the RPM range to the very top when cars are at full throttle.”

Getting authentic team radio clips to cover every possible scenario for each driver and each specific race engineer did present challenges in trying to find suitable examples that could be used in game, Bartlett says.

“It’s been a great feature to implement, but team radio messages often aren’t the cleanest audio,” he explains. “You’ve got a whole mix of background engine noise, and it can take a few listens to fully decipher a radio message, so we had to identify radio messages where all the information can be digested first time.

“We’re fortunate to have a great relationship with F1, who kindly provided us with hours upon hours of audio for us to sort through. This allowed us to create some bespoke conversations that reflect the back-and-forth between race engineer and driver. In addition, these conversations still flow even if the driver and engineer pairings change.”

Bartlett and his team at Frontier received over 50,000 individual audio files from Formula 1, having to manually sift through and categorise each clip to find the ones that would be suitable for being included in the game. The result is that whether it’s Lewis Hamilton telling Peter Bonnington that his tyres won’t last the distance or Will Joseph asking Lando Norris to set his ERS to recharge mode, you’ll hear the actual voice of the engineer giving the command to the driver, who will respond naturally.

“We use the real voices of all 20 F1 race engineers in-game, which have their own individual style of communicating with their driver.

“In the real world, when engineers talk in code, everyone listening in is trying to work out what that means, and these codes can change multiple times during a season. In F1 Manager 2022, we tried to make these radio messages easy to comprehend in split seconds, whilst still keeping each engineer’s communication style front and centre, so you’re able to keep your focus on what’s happening elsewhere.”

As Frontier intend F1 Manager 2022 to be played over multiple seasons with current drivers ageing, retiring and being replaced by up-and-coming younger talents, Bartlett says the audio team have also captured radio clips for Formula 2 and Formula 3 drivers ready for them to make their inevitable way into your chosen team.

“As with our F1 team radio files, we also accessed a wealth of F2 and F3 team radio,” Bartlett says. “So players can expect to hear the voices of many of the stars of these series’ if the player chooses to bring them onto the F1 grid.”

On a practical level, the team radio serves as a medium through which you, the player, relays your commands as team principal to your drivers. With no direct control over the two drivers responsible for getting your multi-million pound racing prototype to the chequered flag, there is only so much direction you can give them.

“By using the driver commands panel, you can ask your drivers to be more aggressive with how they use their tyres, how they manage their fuel delta or utilise their energy recovery system (ERS),” Bartlett says. “We also included commands such as avoiding kerbs to preserve tyre life, and not fighting their teammate, to allow team strategy to be fine-tuned on the fly.”

As realistic as it would be to include, Bartlett says that team radio failures will not be simulated in the game. “Part of developing a unique team radio system is that you really want people to hear it,” he says.

“Team communication is an important mechanic within the game, and whilst it might make for interesting interviews after the races in real world, it just wouldn’t make sense to not be able to instruct your drivers in F1 Manager 2022.”

While Codemasters have made use of microphones to allow players of the official F1 racing game to issue commands to their race director using voice controls, Bartlett says a similar ability will not be featured in the game. However, he is excited to see how players will react to the audio in F1 Manager 2022 when the game releases at the end of the month.

“We’re really proud of what we’ve achieved with this system, and we’ve loved seeing the hype around team radios and the audio in game in general.”

RaceFans is run thanks in part to the generous support of its readers. By contributing £1 per month or £12 per year (or the same in whichever currency you use) you can help cover the costs of creating, hosting and developing RaceFans today and in the future.

Become a RaceFans Supporter today and browse the site ad-free. Sign up or find out more via the links below:

Will has been a RaceFans contributor since 2012 during which time he has covered F1 test sessions, launch events and interviewed drivers. He mainly...
Read more about Will Wood, find all their articles and get in touch with them